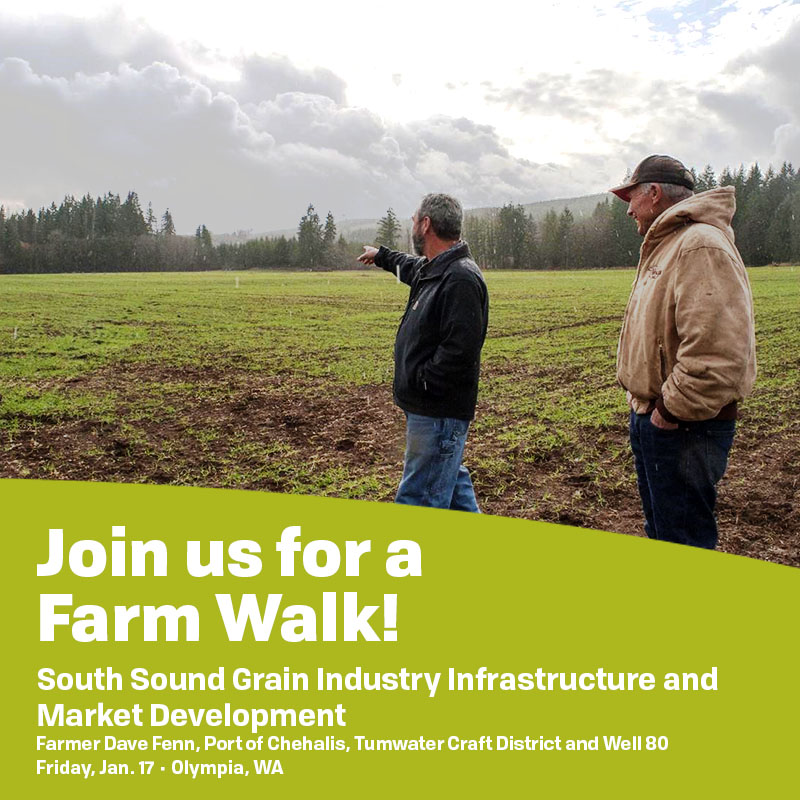 Join us on Friday, January 17th for a special Cascadia Grains Farm Walk, a four-stop tour in the South Sound, checking out developing grains production, market, and infrastructure projects first-hand. First, we’ll visit Boistfort Valley producer, Dave Fenn in Curtis, WA. Next, we’ll stop at the new Port of Chehalis grains transload and storage facility infrastructure project site. Then a quick stop at the Tumwater Craft District for a glimpse at the development of a collaborative space focused on craft brewing and distilling. We’ll wrap up at Well 80 Artisan Brewing for a special WSU local brew reveal!

Please arrive early to secure  parking available in these lots near by:

Dave is one of four regional farmers growing out the recent OSU release ‘Thunder’ malting barley as part of a project to build a SW WA Barley program with Great Western Malting of Vancouver, WA. Dave has been instrumental in developing a regional growers’ cooperative and is an outspoken advocate for SW WA agriculture. On 270 acres, three generations of the Fenn family have produced vegetables for local processors for 65 years; up to the time that these processors either went bankrupt, or ceased issuing contracts to west side growers. Dave currently produces a variety of grains and seed crops as well as forage crops and beef, and is part of a cooperative of regional producers working hard to develop viable alternatives to the processing crops once grown in the region.

The Port of Chehalis and CEO Randy Mueller have been active and essential partners in developing plans and sourcing funding for the development of a segregated grain storage and rail transload facility on Port of Chehalis property. We will roll by the proposed site, and Randy will be on board to offer commentary on the Port’s partnership with regional growers and the project’s progress.

The Tumwater Craft District is built around South Puget Sound Community College’s Craft Brewing and Distilling Program. The collaboration between SPSCC, Heritage Distilling Company, and Ninkasi Brewing has allowed for a unique collaboration amongst partners at the District. Heritage Distilling Company’s new production, tasting room, cask club, and event space facility will be housed under the same roof as SPSCC’s new educational facility.

Get the First Taste of WSU Local Brew

Well 80 is a new brewery and brewpub built on the site of one of Olympia’s famous Artesian wells. Making great craft beer from some of the best water in the world! The group will end their Farm Walk experience at Well 80 with a special taste of a local WSU collaborative brew.